skip to main | skip to sidebar
This site is dedicated to the supporters of Jordan Cullen's quest to race Cyclocross in Europe during the 2011-2012 Season.

Tales of a Western Wisconsin Rider:
http://westernwirider.blogspot.com/
Posted by JimmerC at 4:43 AM No comments: 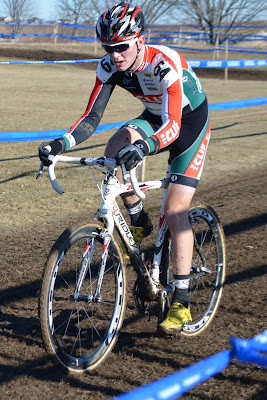 I went into this race with no real expectations because I came back from Belgium feeling pretty tired.  I had a decent start but still tried to move up as fast as I could.

By the end of the first lap I was riding in 7th place right behind Nate Morse.  We caught Curtis White by the end of the lap and then I ran out of gas and those two got away from me.

I kept riding a good tempo until the last lap a group of two caught up to me on the last lap.  I went into the final turn with a small gap and just sprinted in for 8th.

I am pretty happy with the result because  it gives me a front row spot at next year's nationals.  This cross season was great and I couldn't have done it without all of the support from the CLIF Bar Development Team, Ridley Bikes, HED Wheels, Lazer Sport, and everyone that helped support me in traveling to Belgium in December!  I couldn't do it without you guys!!!
Posted by JimmerC at 9:27 AM No comments:

Posted by JimmerC at 8:36 AM No comments:

Jordan recaps his Belgian cross experience on www.cyclingnews.com
Posted by JimmerC at 8:04 AM No comments: 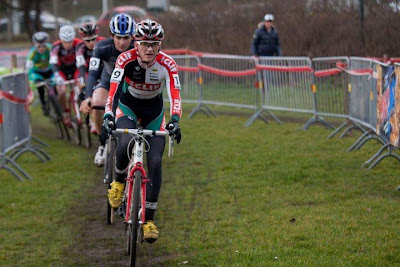 Jordan leading the pack at Bredene. Photo by Tom Robertson.﻿

Jordan did his last race of EuroCrossCamp today in Bredene, and had another bad day. For those that have followed him all cross season, he hasn't been himself since early November in Cincinatti. He's been sick on and off since then, and hasn't had the opportunity to rest up long enough to get completely healthy.

As you might guess, this has been as much of a mental battle as a physical one. Jordan had high hopes of performing up to his full potential, and making a bid for the US CX World's team. For obvious reasons, Jordan will not be petitioning for selection to CX worlds this year.

Jordan plans to rest up as much as he can in preparation for Nationals next week, in hopes for a good result there. Then he plans to take an extended break, in preparation for next road season with his new team, Slipstream-Craddock Junior Developement.

The support from his family, friends, and cycling community has been overwhelming, and for this we are very greatful. Clearly Jordan still had excellent success this cross season, including being selected for EuroCrossCamp, repeating his 3-peat at Jingle Cross, and winning the MN State CX Championships in spectacular come-from-behind fashion. We thank you sincerely for providing him with the opportunity for these once in a life time racing experiences.
Posted by JimmerC at 1:02 PM No comments:

Thank you for your support! 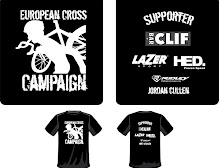